Painting: And it was all yellow! A catalogue on a disaster that turned out fairly well in the end

A sneak peak of what I've been up to over Easter...
After a successful Pirates game on Easter Saturday, I was knocked down with a nasty cold/ flu bug that ensured I was bedridden/ homebound for Easter Sunday and Monday, leaving me with nothing to do except paint and rewatch Burn Notice and inspiring myself to getting some spies painted. [I also watched Sharpe's Waterloo while painting these while humming o'er the hills and far away (Great song!). NO! I refuse to sink time and money into 28mm Napoleonics!!!]
Anyway, I digress... Before being distracted by Pirates, I had ordered and prepped these lovely Henchmen by Artizan Designs from North Star Miniatures, I was picking up one of everything from the Urban Beat Miniatures range (you can see them in the background) just before they were purchased by another company and taken offline (Lucky Break!).
The colour scheme of the henchmen is mostly based on what is on the Artizan website, although it was pretty much what I had in my head to start with, as they will follow the colour scheme on the minion hierarchy in the absolutely fantastic videogame Evil Genius.
So there will be some tougher guards, complete with body armour painted in a red, orange and brown colour scheme.
The MI-6 agent in the foreground was the miniature I painted between layers of yellow (The story continues below the photo). 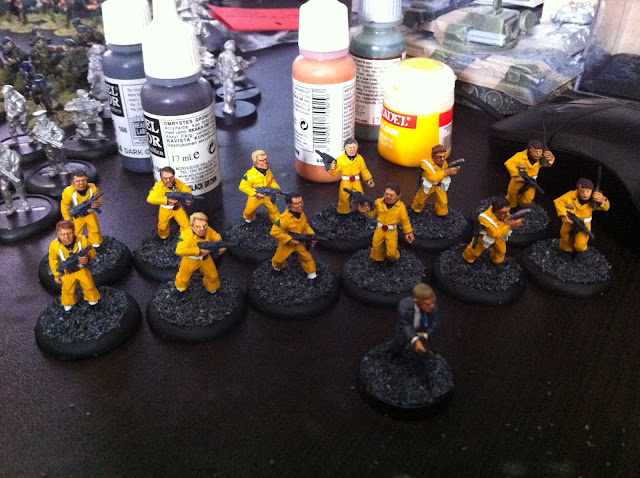 Any GW player with an Imperial Fists army or anyone who has ever painted a 30 years war Swedish Infantry unit will feel the pain that was to come, which I hadn't realised I was entering as I undercoated the miniatures in Tamiya Grey Surface Primer between sniffles...

Having been spoilt witn Vallejo whites that would cover black undercoats in one layer, I had assumed that this would be a lazy and simple exercise, after seeing the streaky mess that stared back at me after my first attempt, I soon realised it would take a lot of time and many, many thin layers of GW Golden yellow I would need to apply.

[I checked the online forums after the initial disaster, a few painters who used GW paints pointed out that the best solution for painting yellow would be 1. A white undercoat 2. A basecoat of  Citadel's foundation paint: 'Iyanden Darksun' and then many thin layers.]

Being too sick (and too lazy) to take a 15min ride into WanChai to pick up the foundation paints, I decided to just lazily layer on the coats while watching TV and painting other miniatures. So I began working on the 'not-James Bond' miniature while watching TV and eventually they turned out quite well, once the other detailing and flesh was coloured in.

The lesson learned for me here is that while things might look terrible on the first coat, if you follow the techniques and advice from the many master painters on the web, and if things still look dreadful, paint in the details, the webbing, pistols and fleshy parts to allow your miniature to look more complete and things will begin to take shape! Oh and thin coats... really thin coats and patience make a lot of difference, something didn't quite realise at the age of 13, but now make more sense at 28.
Posted by Frankie at 22:49