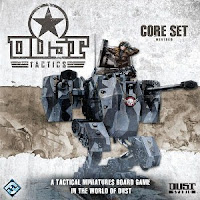 The game was the very first game of Dust Tactics attempted by Tom and me, we wanted to iron out any questions and get a good feel of the rules before embarking on a larger scenario.

The AAR is told from the Allies perspective because I was playing the Allies.

The mission was simple, reconnoitre the area for suspected Axis activity, a part of town with a small, one storey building, like a hundred other towns and a thousand other buildings he had seen since signing up to make a difference in the war effort. 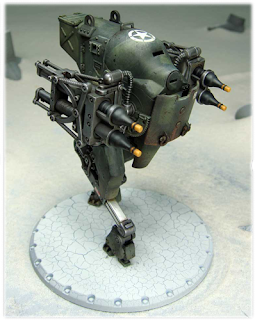 The Allies had the 'Death Dealers' squad, a Ranger team with a light machine gun and a Bazooka which could take the fight to anything the Axis might throw at them and the light walker 'Blackhawk' for extra anti-armour support.

The Axis chose the 'Sturmpioneer' squad and the Hans walker.

Turn 1:
The Sergeant gave the signal for the squad to hold, as they monitored an Axis patrol of Sturmpioneer moving to the left of the building. The sergeant signalled for the Blackhawk walker to take up an ambush position to the right of the building behind cover.

The Sergeant watched in horror as the Hans walker moving much more quickly than he had expected any Axis walker to be able to do, outflank the unsuspecting Blackhawk and blow it to smithereens with a well aimed one shot.

Realising his blunder, he ordered his men to make a break for the building, moving into the area, his squad stayed out of sight from the Axis walker's deadly rockets, he fired into the Sturmpioneer squad, effective rifle and MG fire reduced the Axis squad to three men. 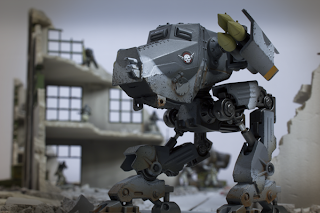 Turn 2:
The Sturmpioneer opened fire, a stray bullet went through Pvt. Kowalski's helmet, killing him instantly. The Death Dealers returned fire, killing the rest of the Axis squad. The pilot to the Hans walker stepped back and took up a position to fire on the Rangers. 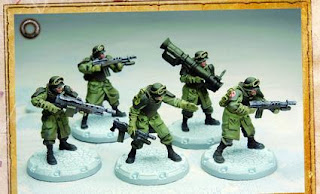 Turn 4:
The Rangers pop out and snapshot with the Bazooka, the Hans explodes as the other Rangers cheer. The Sergeant breathes a sigh or relief as he and his men live to fight another day. 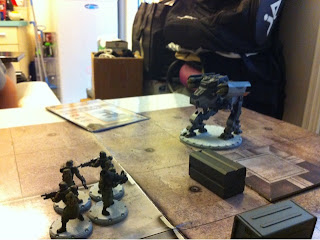 My Thoughts & Two Cents
The game was great fun, short and deadly for both sides. I won initiative but let Tom go first, I wanted to see where he would deploy his walker but he deployed his Sturmpioneers first, I didn't want to give the game away that I had planned for my Rangers to rush the building in the centre, so I moved the Blackhawk to what I thought was a safe position.

Completely forgetting that the Hans had 'Scout ability', it rushed onto the battlefield and fired one rocket (One roll, one hit, one dead Allied walker!)

Fortunately for me, two good rounds of shooting followed and I was able to wipe out the Sturmpioneer before they could do too much damage. The game of 'cat and mouse' between the Rangers and the Axis walker made for two tense rounds, the hard cover from inside the building kept the boy alive for long enough to get a good shot on the walker.

The Death Dealers are great, the LMG combined with rifles means a good round of shooting will neutralise an enemy infantry squad. While the Bazooka makes the team self-sufficient and able to cause problems for enemy walkers that get too close.

The Hans is definitely nasty and a game changer, the fact that it can rush onto the Battlefield with its scout ability will take your opponents by surprise!

Up Next and Coming Soon... My thoughts on the rules and the AAR to the second game!
Posted by Frankie at 23:27 1 comment: