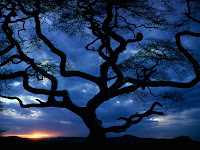 Following three decades of civil war and strife, the Republic of Lumbago seemed to finally settle into a period of peace and prosperity. The discovery of oil off its Eastern shores in 1998 and subsequent influx of capitalism which came with the arrival of an Anglo-American joint venture managed by Baron Petroleum brought prosperity for the majority of the Lumbago people.

Tribal differences were set aside with the election of the Mumbato Presidency, a prominent member of the Lobotomi tribe who chose to appoint Dr. Zambi as his Prime Minister, a respected leader of the Fukarwi people. Throughout the noughties, the country saw unprecedented growth and reform, a mobile telephone network that covered 99% of the country was put in place, sewage, running water and a power grid from a methane gas power-plant allowed the country to rise from poverty. 2008 saw the graduation of the first class of 'Oil Boomers' at the University of E'Ffluent. Small and in the views of the government, insignificant, discontent came from the improvished and neglected Shitomee who found themselves trapped in suburban slums and in rural communities along the coast with little in the way of social mobility.

Even the global financial crisis didn't seem to affect this little corner of Africa as the oil and money flowed and the party continued, the only bump on the road came when Shitomee rebels attacked an oil rig by speedboat, holding 15 oil workers for ransom in the process, although the incident was rapidly resolved with the deployment of British Special Operations troops.

The turn of events came in 2010 when a series of catastrophic accidents drove Baron oil to bankruptcy; in the uncertainty, General Muhammad Al-Fasad (born Rooti Ukukwi, Lobotomi born but Fukarwi by marriage) led his troops in a failed coup against the government, he is now at large and in hiding with his soldiers in the country side.

A NATO taskforce arrived to stabilise the country and prevent the country from descending into chaos. While NATO Special Forces are rumoured to be operating in the countryside looking for General Al-Fasad and doing everything in their power

In 2011, Sino-Petroleum purchased all the assets for the Lumbago project, a Mechanized PLA company was deployed for the protection of Chinese citizens and assets despite there being no more than 15 Chinese engineers on Sino-Petroleum's staff.

On 26th December 2011, a co-ordinated offensive saw attacks on the capital of Njia Pandamito and the major towns of Gumbo Falls, E'Ffluent and Mumbo Jumbo. The capital fell into General Al-Fasad's control on new year's eve 2011. Mumbato's government in exile evacuated to E'Fluent. Lumbago's neighbours have refused to acknowledge Al-Fasad's govenment, concerned with the Islamic military dictatorship in their backyard. President Mumbato's pleas for assistance came in the form of African Union peacekeepers (AU) and a NATO expeditionary force (LFOR) to reinforce the NATO troops already in country.

A Chinese naval taskforce is also en-route to protect her own interests.

Games will commence from 1st January, 2012; with the capital and the south of the country under General Al-Fasad's control. NATO and AU troops are tasked with killing the dictatorship in its infancy while the Chinese military will have its own agenda in achieveing what it sees as its rightful rise to hegemony.
Posted by Frankie at 00:33 No comments:

I've updated the name of the Blog to cover all my wargaming adventures.

A large number of games will feature the fictional nation of Lumbago, in the continent of Africa, created to facilitate a series of 'Heart of Africa' games at the Hong Kong Society of Wargamers (HKSW). Amusing letters and after action reports can be found here.

This blog will expand on the history of this fictional country, over its development from an Africa colony fought over by the great powers into an AK-47 republic in the 1950's to 1980's and eventually into a 'Rogue state' and 'Pirate haven' in the early parts of the 21st century. The rules used will be variations on the AK-47 rules available from Peter Pig, Crossfire by Arty Conliffe and Ambush Alley/ Force on Force by Ambush Alley Games.
Posted by Frankie at 21:21 No comments: