AAR for Geezers! Shut It! (With colour photos!)


Having bought the rules and miniatures for a little over a year, I finally got off my fat 'arris and got all the miniatures painted and ready for a game!

All the photos from the game can be found here: http://photobucket.com/geezersHK

THE BEDFORDSHIRE TRIBUNE
DCI Seib spoke to journalists today outside the Bedfordshire County Court as three suspected members of an armed robbery walked free from court today on grounds of insufficient and circumstantial evidence, while in one case, the judge was extremely critical of the police and the procedures followed by officers of the ‘Heavy Mob’.

A livid DCI Seib made accusations of the juries of theh cases being bribed and vowed he would eventually bring the men to justice.
The men were arrested following a fierce gun that battle erupted in the industrial district of Bedford several months ago. Members of the Bedfordshire Flying Squad foiled an attempted armed robbery at the wages office of the Matrolls Components Factory at the corner of Waterman Road and Cowley Way. £6,000 were recovered at the scene.
Sharon Bristols, wages clerk at the Matrolls office said, “It all happened very quickly, a few seconds after the security guards dropped off the day’s wages, these two men wearing balaclavas, carrying pick axe handles and shotguns burst into our office shouting at us to keep our heads down and to hand over the money. Our security manager, called the police, they arrived almost instantly, like they were waiting just round the corner. I heard a lot of shouting and shooting outside. And a man with a moustache and long blonde hair ran into the building. When this happened, they all started to turn on each other, swearing and accusing each other of being ‘snitches’.”
Two robbers were shot, one, ‘Mad’ Harry Hunt was killed by his own gang during this confrontation, while another was shot and wounded by the security manager and his old service revolver from the war. One man is thought to have made his escape during the confusion, while witnesses confirmed a Jaguar sped away from the scene shortly after the criminals surrendered.
The robbers briefly took the three office workers hostage, but decided to flee from the scene as the police closed in. During their escape, DS Fletcher shot a fleeing suspect in the leg and forced the other men to surrender.

Cowley Way
. The van was thought to be carrying an estimated £6,000 for the Matrolls factory’s daily wages.
Brenda, barmaid at the Owl and Parrot said, “I was cleaning up after the regulars had finished their lunch when I heard a lot of shouting outside, men with stockings over their head and in masks shot at this van and then a load of blokes carrying pick axe handles ran up to the van and pulled one of the security guards out, the police were there very quickly, like they were expecting them.”
The suspected leader of the gang, one, ‘Mad’ Harry Li was killed by his own gang during this confrontation, most of the gang quickly surrendered once the police arrived, except for ‘Soft’ Eddie Rawlins who attempted to hijack the van and make his escape with the money. Unfortunately, he didn’t expect the van to be driven by retired prize fighter Chuck ‘The Iceman’ Widdle. Who knocked out the unsuspecting villain with one punch. 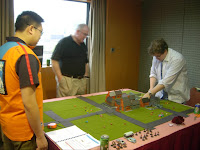 A fantastic afternoon was had by all, the rules played out extremely well and apart from getting everything painted up, we're now ready for our big game in August.
Posted by Frankie at 00:58 No comments: