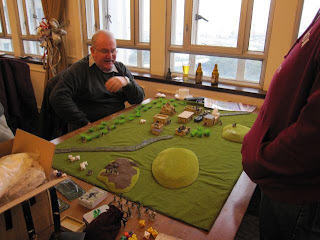 I read this scenario a while back on Donogh McCarthy's excellent Land War in Asia blog and it looked like it would be great fun.


As Peter, one of the participants in the game pointed out, the scenario appeared to be based on a 1988 film called 'The Beast' or 'The Beast of War'.

"A punitive column has been sent deep into Qandahar by the Soviets. A T-62 is with them, in order to test how it can cope with the green zone. It’s thrown a track when making a tight turn inside a village, and due to a command oversight, the T-62 was left behind. A single BMD carrying an engineer team has been sent back to get it moving again. " 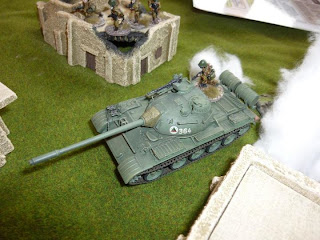 3 out of the 4 man tank crew accompanied by a sharpshooter take up an overwatch position in the house next to the tank, the other crewman is on overwatch with the DShK on the tank.

It is assumed that the Mujahadeen have been hostile for some time before the arrival of the engineering team and that the area is declared a free-fire zone by Soviet high command.


The BMD (Yes, I know the scenario says BMP, but I don't have any BMP's in my collection just yet!).


The Mujahadeen and Russians were excellently painted by Piers Brand.

My dear comrades, welcome to the Malinovsky Military Armored Forces Academy, what you will see today, will be a textbook mission on the repair and extraction of a broken down armoured vehicle with a small, mobile and aggressive fighting force.

A T-62 tank breaks down during a show of force against an Afghan village harbouring anti-government militia, its escorting units had been extracted before the commander realised the tank was in trouble. 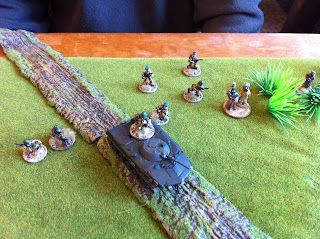 The tank crew and a VDV sharpshooter setup a defensive position and await assistance from an incoming engineering team with VDV escorts. The tank team ensured that firepower was on their side by employed the DsHK on the tank.


The local militia converge on the village and prepare to ambush the incoming Soviet reinforcements. 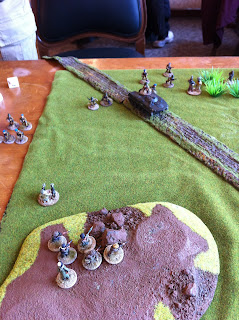 The VDV squad were split into two fireteams, with one fireteam and the engineers stowed safely in the BMD while a Machine gun team (Which we treated as an independent weapons team with all the bonuses that carries.) and the second fireteam proceeded on foot as an escort for the BMD.

An RPG gunner was perched on top of the BMD, limiting the BMD to cruising speed but giving the vehicle additional firepower. 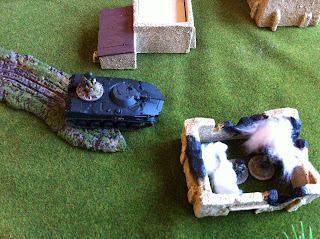 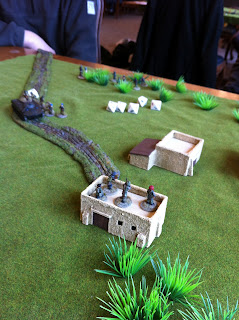 The exposed MG team and the escorts are peppered by shots coming from the fields to its left and insurgents converging on top of a hill. However, the fire is inaccurate and the combined firepower of the BMD, the RPG gunner on top and the escorting fireteam eliminate the resistance in the fields. While the Mujahadeen on the hill are engaged by the MG team. 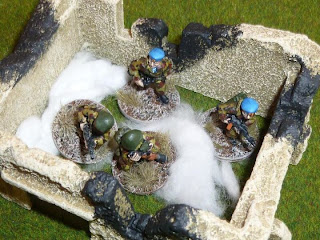 As the group advanced towards the village, two members of the VDV are caught in the crossfire coming from the hill and insurgents emerging  from some of the buildings in the village, the combined firepower of the ATGM on the BMD and the RPG gunner destroys the building. The wounded men are loaded into the BMD and replaced by two troopers in the BMD. The escorting fireteam fixed bayonets and charged screaming into the still smoking rubble, terrifying its occupants, breaking their morale as they fled from the elite warriors of the Soviet Union. 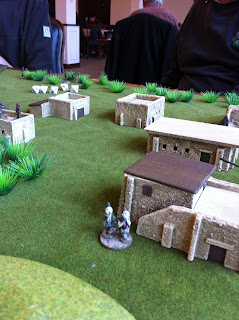 The tank crew, maintaining constant radio contact with the incoming engineering team, warn of an AT-RPG team waiting in ambush within the village.


The DshK gunner maintains overwatch as the BMD team take the risk of drawing out the RPG team, the strategy is successful as the dangerous AT-RPG team is gunned down.

A second insurgent team in the village decide that they cannot afford to wait much longer and that assualting the small group of tank crewmen would give them a better chance than facing a group of VDV paratroopers.


They are quickly gunned down as they made their way through the village streets towards the well entenched tank crew.
The VDV fireteams take up defensive positions around the village as the engineering team finally reaches the tank.
The resistance and reinforcements from the local Mujahadeen was less than expected, with only one Mujahadeen cell emerging on the outskirts of the village, who were quickly dealt with by the vigilent VDV and the firepower of the BMD's main gun.
The engineers quickly repair the tank with no problems, a second Mujahadeen cell emerge on the hills overlooking the village exit, but with the additional firepower of the tank and a still combat effective VDV squad, the Mujahadeen are suppressed as the Soviet team leaves the village. 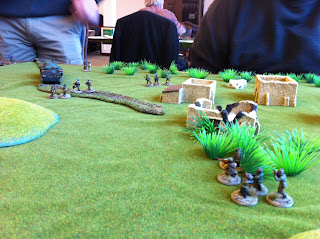 
The VDV and Soviet mission was almost textbook, hence the tone of the AAR itself.


It was Michael's (The VDV commander) first ever game of Force on Force and he played really well. The BMD sped off towards the objective, leaving the VDV exposed and without cover or armoured escort as it came under inaccurate but heavy fire from two and later three sides. This would lead to the two casualties for the Soviets.


The tank crew, commanded by Peter, who has appeared on many of the other AAR's made exceptional use of overwatch and kept the Mujahadeen at bay. The elimination of the lurking AT-RPG team also ensured that there were no late surprises.


The Mujahadeen, commanded by me, we unlucky with the reinforcements, with nothing arriving until late in the game and in all the wrong places. But the important thing is, we all had fun! 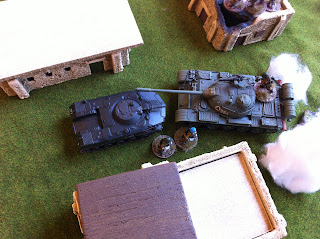 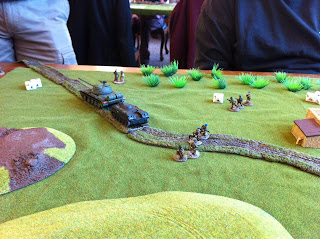 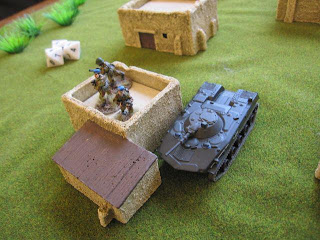 Email ThisBlogThis!Share to TwitterShare to FacebookShare to Pinterest
Labels: Force on Force