Somewhere in the Mediterranean: 1900hrs, There was the most glorious sunset. As the grey ships cut through the wine dark sea they were bathed in red, orange and purple. Mariners from Russia and America alike looked to the West and wondered if this was an omen, would they ever see such a sight again?

Deep in the bowels of the converted fish factory ship Pechenga, members of Naval Spetznaz teams look at a satellite photo of Suda bay.


"Comarades, we have our orders, an Mi-8 helicopter from the fleet will fly us out from under the cover of darkness at 4.55am tonight. Our target will be the aircraft fuel facilities at Suda bay, every member of our team will be given demolition charges and naval fuses."
"One team will be deployed from the East while two more will infiltrate from the West. Our Helo will provide us with some intelligence on American troop movements in the area and extract our team when necessary. The crew chiefs on the DsHK's will be able to provide us with some air support."
"Our intelligence indicates that the facilities will only be lightly guarded by a USAF security team." 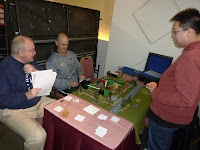 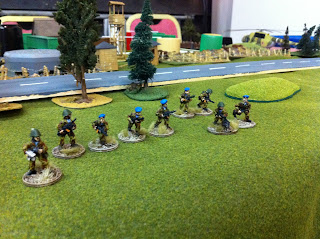 
The troop organization for the USAF security team is taken from page 43 of "Ambush Valley". 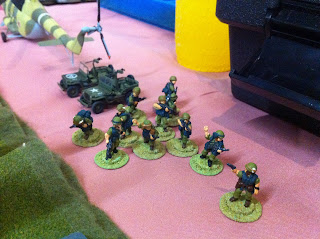 Initiative level: D8
Confidence level: Confident
Body Armour
Troop Quality/ Morale D8/ D10
Each squad comprised of 2 fireteams of:
1x NCO w/ M16
3x Riflemen w/ M16
1 GMPG Operator w/ M60.
*NB* As the gamemaster/ umpire was worried that it would be a walk-over for the Spetznaz teams, he treated the US troops as all wearing body armour instead of Flak jackets. This certainly made things tougher for the Russian player.

Special Rules for the scenario:

Crossing the wire: Any troops crossing the wire surrounding the base must pass an individual troop quality check, if they fail, these troops are assumed to be hung-up on the wire for a turn. 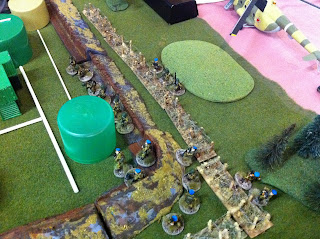 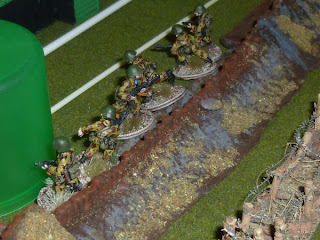 Spetznaz teams Alpha and Beta are deployed to the west of the base as a larger number of oil tanks were on that side. Spetznaz team Alpha and Beta moved through the wire, with 2 and 3 troopers lagging behind each  for each respective squad, on the east side of the base, a disorientated Helo pilot unused to flying using Night Vision goggles drop off Spetznaz team Charlie  in the wrong location. [They wouldn't arrive at the starting line until turn 2.] 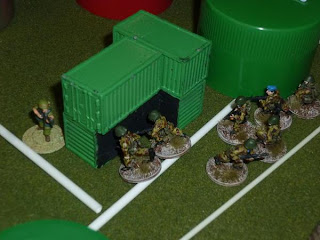 One of the scouts thought he heard rustling inside the base, but the aggressive squad leader urges the team forwards, pushing team beta right into the path of a waiting and alert USAF element and their M60 machine gun. One trooper armed with the UGL is seriously wounded, but the Spetznaz team pushes forward. Spetznaz team Alpha, taking advantage of the chaos and distraction provided by team beta move towards their objectives and plant their explosive charges. 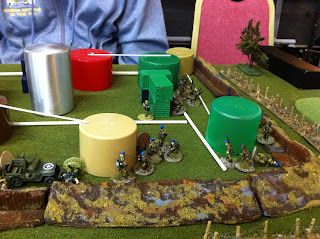 Team beta, coming under heavy fire, return fire of their own, silencing the M60 and pushing forward.

Outside the gate, a military police team of 4 soldiers in a jeep mounted with a .30 cal machine gun are doing a routine patrol, they drive quickly towards the gunfire.

Moving towards the nearest oil tank and prepared to plant their charges. The MP's jeep lay down machine gun fire to pin the Spetznaz team behind the oil tank, to make matters worse, the downed USAF element, thankful that they were chosen for the trial in the latest versions of US military body armour also prepared to return fire, trapping the Spetznaz team in a deadly crossfire. 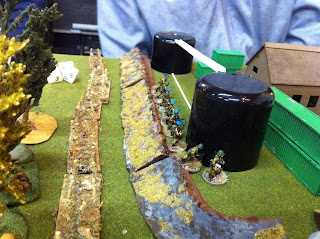 To the east, the lost squad finally arrives, but more than half the squad get hung up on the wire for another turn.

Spetznaz team beta once again fires on the USAF element, while the Spetznaz squad leader fires an accurate shot to bring down one of the MP's.

Hearing the distress of beta team on the radio [It was purely from the luck of the draw of the Fog of War cards], the Helo makes a pass with it's side mounted DsHK. Knocking out the engine and machine gun on the MP's jeep and wounding the gunner. 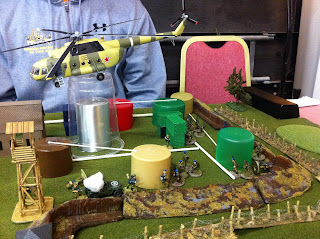 Spetznaz team Charlie comes under fire from an officer and his batman who were resting in the guardhouse. The unfortunate batman would be hit and wounded 3 or 4 times over the course of the game. The officer will escape this engagement without a scratch. They return fire with the RPG, before an M60 fires from the pillbox, pushing the squad back behind the berm. 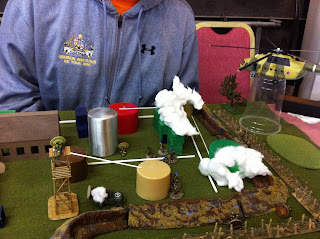 While beta team remain pinned from the tenacious security element, alpha team finish planting the first set of charges and move up to a new position and detonated the charges once the remaining members of Charlie team moved away from the rigged oil tank. Two members of Alpha team are stranded with Charlie team as they were separated from the rest of their squad by a lake of burning jet fuel.

Team Charlie and Beta, with casualties mounting, remain pinned down and in a fire fight with the USAF security teams, Team Alpha managed to move on relatively unharassed, planting charges on three more targets. 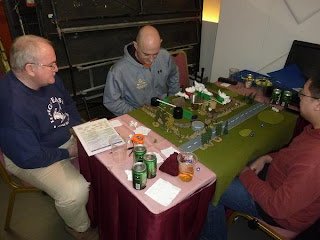 Three members of Spetznaz team Charlie had split off from their main squad to plant charges on one of their target oil tanks, the combination of good accurate fire from the second M60 killing 2 or the 3 members of the breakaway group and the arrival of a second USAF security detail allowed the US forces to capture a wounded member of the Spetznaz team. Fire from this new USAF security flight pushed back Spetznaz team Charlie and preventing them from rescuing their fellow team member.

Enfilading fire prevented team alpha from planting one of their charges, they decided to abandon the final target, avoiding a bloody fire fight and moved on to other undefended targets to the east. A faulty fuse meant one of the charges failed to detonate and hindered the progress of team alpha. 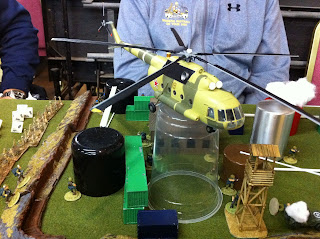 The helo made another pass at the well defended American position, but failed to take any targets.

The arrival of more Americans in the form of a second jeep and MP team and warnings over the radio of inbound Soviet fast movers meant the Soviets were losing the initiative and needed to depart the area as soon as possible.
Beta team, who had suffered heavy casualties and were down to 5 men and surrounded by burning fuel tanks, had only one avenue of escape. The squad sergeant ordered his men to fix bayonets and they made a final and desperate close assault charge at an American position, the Soviets succeeded in the melee, taking no casualties and capturing one American soldier to take back to the fleet. They came under further fire from the Americans, but were able to destroy one of the fuel tanks and escape with their prisoner. 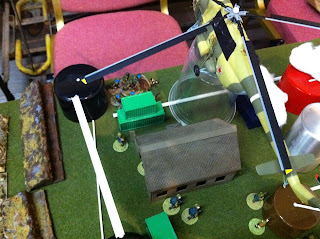 Teams Alpha and Charlie met up to plant the final charges, but not before coming under fire from the Mi-8 as a confused crew chief [Again, a Fog of War card] open fired on the huddled Spetznaz.

With two troopers from the Spetznaz teams seriously wounded, they fled the area coming under heavy fire from the arriving MP's and detonated the final charges. 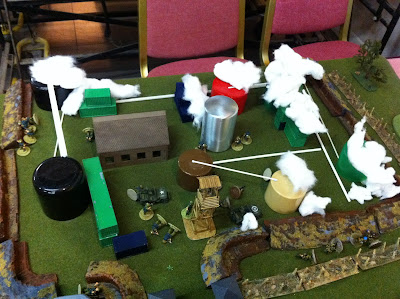 The final damage to the Spetznaz teams were 3 KIA, 5 seriously wounded and 1 captured. Over two-thirds of the Suda bay fuel facilities were destroyed and a member of the USAF security flight has been captured and will be interrogated by our comrades at the KGB. Out of the 3 squadrons flying out of Suda bay, there are only facilities available to refuel one squadron after their first strike.
The game was thoroughly enjoyed by everyone and the game was tense and exciting from start to finish.
The fuel tanks were spray can lids, the containers were 15mm and from Highlander games. The Soviets were painted by Piers Brand and the Americans were from Britannia's Vietnam range.
Posted by Frankie at 22:30