On the morning of October 24 1973 Israeli troops reached Suez City on the West Bank of the Suez Canal, cutting off the Egyptian 3rd Army. President Sadat requested that U.S. and Soviet troops  be sent to enforce a cease fire. Secretary Brezhnev wrote to President Nixon accusing the Israelis deliberately violating the understanding reached by the U.S. and the U.S.S.R. and supported Sadat’s proposal for  joint cease fire enforcement, but added: “Let me be quite blunt. In the event that the U.S. rejects this proposal, we should have to consider unilateral actions of our own.” 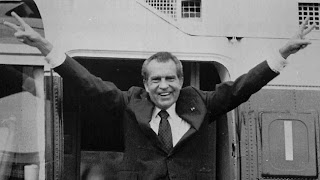 In the absence of the President who was spiralling down into his Watergate debacle and possibly drunk, Secretary of State Kissinger chaired a NSC meeting that raised the American Defence posture to DEFCON 3 for the first time since the Cuban Missile Crisis, and for the last time in the Cold War. 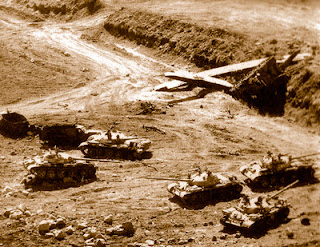 Both sides reinforced their fleets in the Western Mediterranean, including their amphibious forces. With two carrier battle groups in place and a third arriving, the Americans had a powerful air weapon, on the other hand the Soviets were well ahead in missile technology. The Americans had much better submarines, the Russians had many more of them. It was by no means a one-sided contest and the Chairman of the American Joint Chiefs of Staff, Admiral Thomas Moorer concluded that: “we could lose our ass in the eastern Med under these circumstances.”
America’s NATO allies were not playing in this game. American Secretary of Defense Schlesinger considered Ted Heath’s Conservative British Government to be “quasi-Gaullist”, and, of course, the French were Gaullist:
A brilliant documentary by Radio 4's Mike Thomson here.
“DEFCON 3 and Rising” assumes that the Middle-East War continues, and the DEFCON continues to rise, until a non-nuclear war breaks out in the eastern Med as both sides move to support their clients.

The game will be over 3 stages and played over the course of December and January.
A large chunk of the game will be naval and will use rules designed by a member at our club who also made a nice conversion for Crossfire in the Indo-China war which can be found here: and a clever and simple set of Napoleonic rules.


We are still in a pre-war state, with American and Soviet forces jockeying for position in the Med readying their forces for a first strike. Which has taken place over the last month or so. 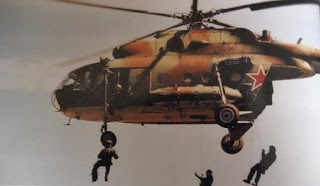 Without compromising Operational security, Soviet Naval Spetsnaz have been placed on operational alert, with night time conditions perfect for a raid on American facilities. Before them are a large number of  targets to choose from: 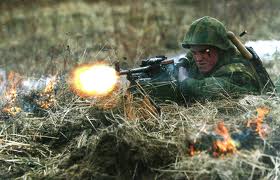 An AAR will follow after the game on Saturday.
Posted by Frankie at 01:39