Painting: SAS Section for the Falklands

Having been laid up at home with aches and pains from a particularly rough MMA class on Saturday, I had the impulse to paint some of my growing lead mountain for the Falklands/ Cold War Gone Hot. The results are below: 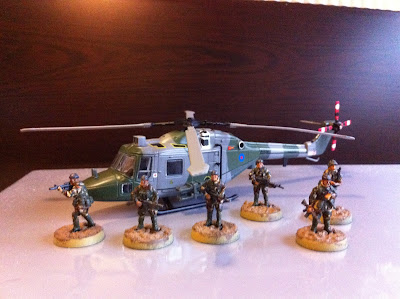 The excellently sculpted and cast miniatures are by CP Models, the painting method used was taken from Tim's Wargaming Blog with a few changes, which I will list below: 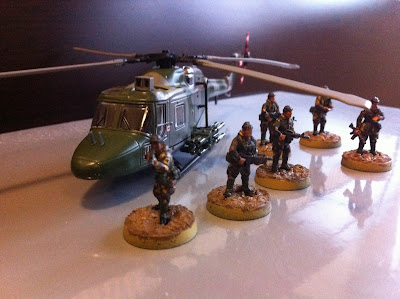 The figures were undercoated in black and then given a basecoat of Dunkelgelb as I had a can of the spray handy. I then went over the webbing in dark green before adding the brown splotches according to Tim's instructions as well as adding the brown to the flesh areas as a base. I added a few black lines before the adding green splotches.

On a few occasions, I thought I had ruined the painting and began to fuss over whether there was too much green or dark yellow.

But adding the flesh and black to the wool hats and rifles made pulled it all together.

The webbing and single figure with a helmet was given a light drybrush of Olive green/ Yellow Green while the rifles were drybrushed with dark gray and the wool hats were drybrushed with a lighter grey.
I'm still trying to decide whether I want them to have their Bergans (Also, I ran out of Superglue and was too lazy to leave the warmth of the flat to find some =P). I'll probably spray the Bergans tonight and glue them on if I remember the glue.

Any comments will be most welcome. The Lynx was purchased on eBay here, the seller has a good selection of 1/72 scale tanks, military vehicles, jets and helicopters for sale, does combined shipping and actually speaks to his customers!
Posted by Frankie at 19:45