What's in the box (Axis Miniatures)?

The Axis miniatures total up to 127 points out of the box.
All the Axis miniatures, more so than the Allied forces, can be said to be unique and limited to the Revised Core set. You can't buy any of them separately from the shops as individual units, but you can find them on eBay. 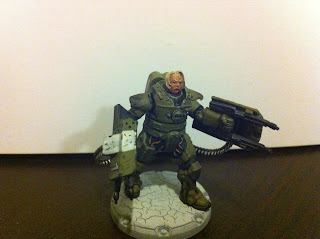 Lara is an Inf.(3) hero(ine) armed with massive MG's, her weapons mainly allows her to deal with infantry hordes and gives her the ability to deal with any light aircraft. As an Inf. (3) heroine, she can join any Inf. (3) unit at the start of the game, as a hero she will add her wounds to the unit and add to their survivability on the field of battle. However, as mentioned in the other blog post, she is my 'all but one', a combination of issues, mainly to do with how her head is sculpted, (With the massive forehead, she looks like Peter Weller in Robocop!) as well as the lack of detailing in the gap between her torso and legs, the figure looks a little off, especially when you compare her with what's in the rest of the box. 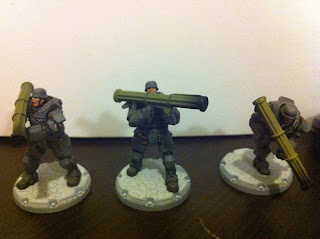 The Heavy Flak Grenadiers, heavily armoured troops armed with Rocket launchers make them an ideal Anti-tank hunter-killer team, stalking enemy walkers or holding flanks and objectives by making the enemy commander think twice about moving walkers and aircraft towards them. They're beautifully painted and there's lots of detailing and shading on these figures making them 'better than what I can do' and justifying the painting costs. 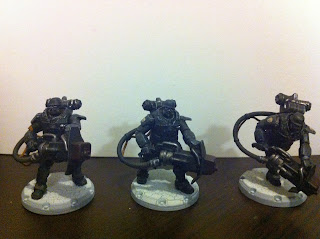 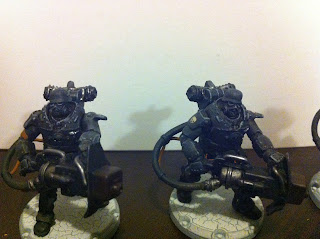 The Heavy Laser Grenadiers like all 'experimental technology' troops in the game (Phaser armed Allied troops and Tesla weapon armed SSU units), have the potential to be game changers and game winners or incredibly frustrating. They have the potential to take out walkers and heavy troops dug in behind cover (Laser weapons ignore cover)

Out of all the troops, these capture my imagination the most. They're beautifully painted, look incredibly sinister and let's face it, they're armed with friggin' laser cannons!

They will definitely have a place in any army list I make! 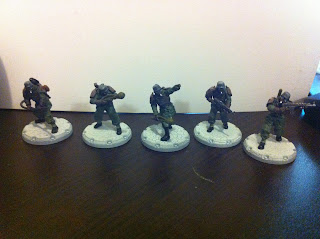 The Sturmpioniere, are Inf. (2), they are one of many types of the PBI in the Dust universe and will form a backbone of any army, what make them special and different from other Dust units is the flamethrower. Apart from the Axis hero Stefan, Axis Inf. (2) troops don't have access to flamethrowers. However, as far as the makeup and miniatures go, it is basically a Recon Grenadier squad with its MG replaced with a Flamethrower. I would use them to hold objectives or escort the Light Walker that is in the box, as the walker lacks Anti-infantry capabilities. The 3 Panzerfausts that it carries will also give enemy walkers problems. 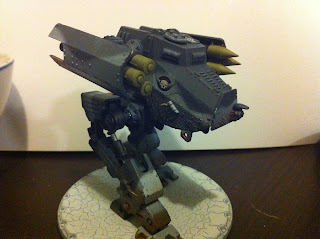 Hans is the centrepiece, it's a Light Walker, so it doesn't have a lot of wounds, the range of its weapons are relaively short and it's not very well protected, an enemy Inf. 2 team with a few anti-tank rockets would be able to take it out. However, this walker carries a very heavy punch with one of its rockets capable of knocking out any enemy walkers with one good accurate shot!

Also, this walker is incredibly well painted with some great battle damage and faux 'peeling/ bubbling paint/ rust' effect added to the body of the walker! 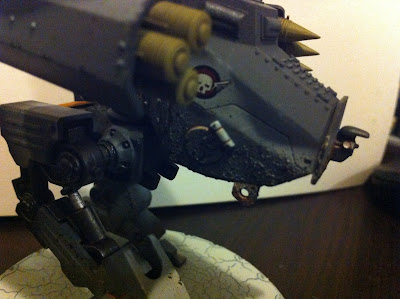 There's some really great stuff for the Axis side in the Revised Core set, anti-armour units, anti-air assets, a hero capable of taking on a few infantry squads by herself, a very interesting and nasty walker and heavy infantry unit that could change the game with a few god rolls, but it's far from a complete army. It's a great introductory set and everything here will be useful to most Axis commanders, but you will need to invest in a few boxes of PBI and a Medium Walker or two give the army more survivability and flexibility.